The anticipation was high as Sammy Hagar brought his latest band configuration to Orlando for what proved to be one of the best shows this year without a doubt. It's been well over a decade since Hagar last set foot in Central Florida with a show on the now infamous Sam and Dave tour in 2002 with past and present Van Halen lead singer David Lee Roth co-headlining shows. Everyone knows how that one ended. It's now been twenty years since Hagar left Van Halen and went back the way he came into Van Halen. A solo artist. This does not mean he has gone on to playing the retirement circuit. In fact, nothing farther from the truth could be said. The energy and excitement was palpable as soon as the band hit the stage April 27 at the Hard Rock Live in Orlando. What made this show so memorable for the the Red Heads (Hagar's name for his fans) was the band that is traveling with him this time around. After playing with his main band The Waboritas off and on for the last 2 decades as well as his super group Chickenfoot, Hagar brought his latest incarnation "Sammy Hagar and The Circle" to Orlando for a very high energy set. The band consists of long time Waborita guitarist Vic Johnson, original Van Halen bass player Michael Anthony, Jason Bonham on drums (son of late Led Zeppelin drummer John Bonham) and Hagar. The name "The Circle" was given to the band as Hagar felt that this music being played really brought his career around "full circle". It consisted of music from his days in Montrose, his early and later solo material, Van Hagar,  as well as the music of Led Zeppelin which has always been so important to him.

Lights out began with a nice video montage of various images spanning the career of The Red Rocker such as the "I Can't Drive 55" video, various Van Hagar album covers and his super group Chickenfoot. Once the boys hit the stage it was immediately apparent that they were not here to go through the motions and really "put the pedal to the metal" and wasted no time with "There's Only One Way To Rock". At this point it became obvious that this was already going to be the best show I've seen in quite some time as well as the most fun to photograph. With so much energy being spent the photographs almost took themselves. This lead into "Rock Candy" and finally "Good Times, Bad Times" hitting the first of several Zeppelin tunes of the night where Hagar channeled his inner Robert Plant. 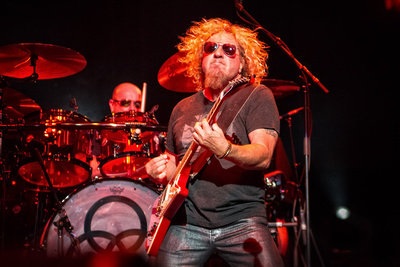 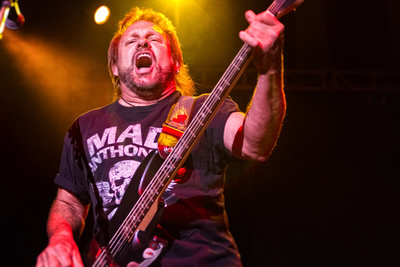 Throughout the entire show Sammy Hagar seemed like he was having the time of his life and wanted to be that guy with the great house throwing the really awesome party down the street as he imbibed onstage with his own line of "Beach Bum Rum"" even going so far as to share it with the few lucky people in the front row as he topped off their glasses with some out of the bottle. One thing that really stood out for me at this show was the cover of another song made popular by Led Zeppelin "When the Levee Breaks". The lights became dark and the stage filled with smoke to set up a moody, swampy vibe as the band jammed right on through this tune as Hagar played this one on guitar. The imagery that was set was of an early Zeppelin concert such as in their famous movie "The Song Remains The Same" complete with a zeppelin moving across the giant video screens. Later, prior to breaking into the party anthem "Mas Tequila" Hagar brought out an air canon and said to the crowd that it wasn't a party until he got to shoot into the air which rained down confetti and streamers onto everyone cheering below. Other highlights included the Van Hagar tunes "Runaround" off of their 1992 release " For Unlawful Carnal Knowledge" and "Right Now"as well as a stripped down acoustic version of "Dreams" off of 5150. This tune received a complete makeover arranged by Vic Johnson that was performed by just him and Sammy and got the entire crowd singing along "Higher and higher straight up we'll climb". Johnson plays the part of Eddie Van Halen so well that it truly felt like I was at a Van Hagar concert all over again it was that realistic. Those are some very tough shoes to fill and Vic does an amazing job at filling in those seemingly impossible guitar riffs of EVH. 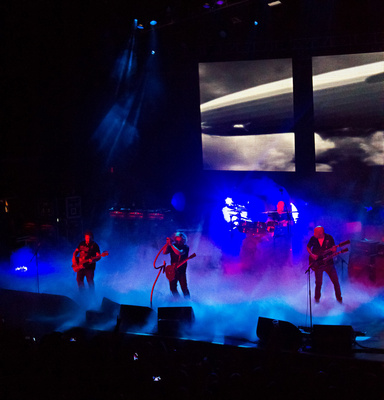 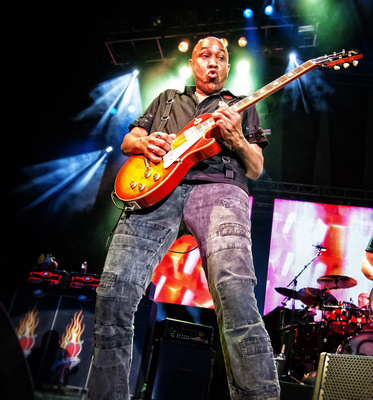 Another member who does a lot of the heavy lifting without getting the credit he deserves is bass player Michael Anthony. In Van Halen, he was the anchor to the VH sound with his impressive backing vocals. If you listen back to any of the Van Halen albums you can hear how his presence was so important and they've not been the same since his replacement by Van Halen's son, Wolfgang. Anthony came out all smiles and was pumped to play for the Hard Rock crowd.  At the end of the show, Florida resident Jason Bonham thanked the crowd for supporting him and his Led Zeppelin family over the years and that it truly is an honor to play these Led Zeppelin songs " For dad". This was as close to seeing a Led Zeppelin show as I could have ever hoped to see. I never thought I'd see another Sammy Hagar show again in my life as most of his shows are on the West Coast or in the Northeast. I was so impressed by this performance that this show is going to be a very, very difficult show to top. Sammy Hagar and The Circle will continue touring on and off again throughout the year so check out http://www.theredrocker.com for more tour info and dates. 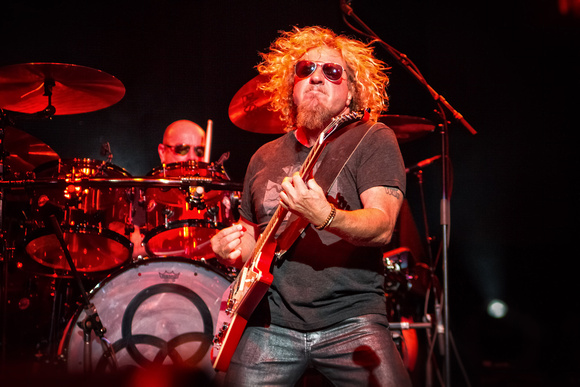