July is typically Florida's hottest month and with it comes some of the best summer tours. North Florida was treated to one of the best shows of them all when the Twenty One Pilots "Emotional Roadshow" was booked to play to a sold out St. Augustine audience months ago as one of the hottest tickets around. As soon as the show was announced it was immediately sold out with only a few select seats left. However, being that this was at the SAA there really is no bad seat anywhere and anyone lucky enough  to gain admission gets a great view anywhere they may find themselves as the capacity is under 5000 seats under the circus-like canopy. Joining TOP were New Orleans band "Mutemath" as opener. 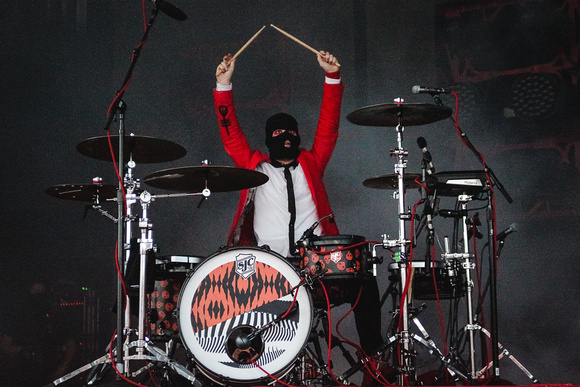 Formed in 2009 by college friends in Ohio, the duo consists of singer/keyboardist Tyler Joseph and Drummer Josh Dun. Their meteoric rise has been fueled by their high energy live show which has gained them fans all around the world. This tour dubbed " Emotional Roadshow" is in the midst of the U.S. leg of their world tour which will continue well into 2017 with stops in New Zealand and Australia. Of note, in February the duo will be returning for a show in Tampa at the Amalie Arena.

The humidity was thick and coupled with the heat, it made for a very hot and sweaty evening for the many throngs of fans who were noticeably younger and who had waited outside the gates since the early morning for a chance at the rail. This was a recipe for disaster as throughout the night many people began to pass out from the heat and lack of hydration. I encountered a young girl who had passed out from the heat who I assisted with icing down while waiting for medics to arrive to the scene.  Additionally, our photography set was abruptly cut short after the second song when another young concert goer passed out in the pit and singer Tyler Joseph pointed it out as medical staff rushed into the pit and jumped over the barricade. It was at this point that security gave us the hand across the throat gesture and quickly ushered the photographers out of the pit area. 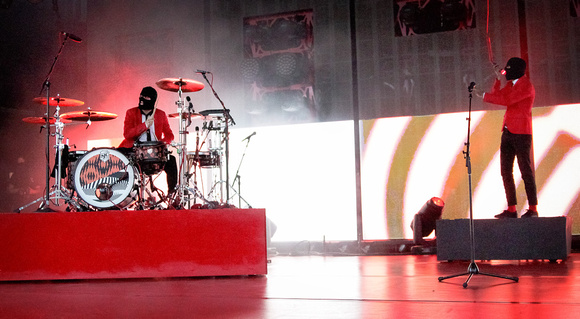 As the crew prepared the stage, a black curtain draped the front of the stage as they worked behind the scenes. Once house music quit, the stage went dark and curtain dropped to the heavy beats of "Heavydirtysoul" as drummer Josh Dun clad in red sport coat and black ski mask smashed away at his kit while singer Tyler Joseph casually walked onstage in the same outfit slowly walking around as a microphone descended from above, much like a boxing match. Red and white lights flooded the stage which was a welcome change from their past shows which were typically known for being quite dark and almost impossible to photograph.

"Migraine" followed up as Joseph sat on keys for a slower tune taking some of the attention away from Dun who was smashing his kit unabashedly.

As the show progressed along there was never really a moment of low energy. The band did a great job of mixing old and new material into their set making sure that everyone got to hear material that represented their whole catalog including 2015's " Blurryface". Additionally, they made it a point to get close to everyone in the audience as they suddenly appeared at the top of the venue by the lighting board where security suddenly pulled off the tarp on a mini stage with drum kit and piano and broke into "The Pantaloon" and gave those lucky people at the rear of the venue a seven song mini set.

After heading back down to the main stage after this mini set, Twenty One Pilots brought out opener Mutemath for a few songs which included covers of "Twist and Shout" and House Of Pain's " Jump Around"  which included break dancing and some impressive audience participation.  As if the night could not get any better or more impressive the lights went down onstage as Joseph quietly sat down on the stage and crew rushed out with a giant inflatable ball of which Tyler was inside of. Lights came on and Tyler ran offstage in this ball right over the top of the audience as he frantically ran around on top of the pit crowd to keep his momentum going and not get stuck eventually landing back onstage. This was certainly a visual thrill and no doubt entertaining. 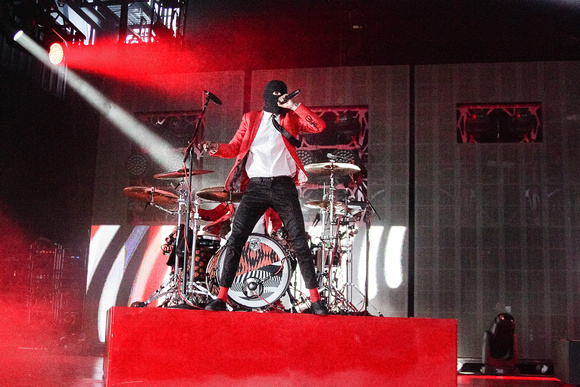 It's clear that Twenty One Pilots have earned a great reputation for their live shows. Years of non stop touring as an opener playing for small crowds has primed them for the larger venues in the world like Madison Square Garden where they will be headlining two nights. However, on this night they brought this high energy and immensely entertaining show  to the comfy confines of St. Augustine of which will likely never be done again. Those lucky enough to see TOP in such a small venue as this got a show that they will never forget. For this writer it ranks right up there with some of the very best shows I've ever seen

The complete setlist is here http://www.setlist.fm/setlist/twenty-one-pilots/2016/st-augustine-amphitheatre-st-augustine-fl-73ff8a25.html