Nineties rock is still alive and kicking despite the lack of flannel and Gavin Rossdale and Co. are the proof. Bush played an incredible high energy show to a mostly full Hard Rock Live Orlando Wednesday night in support of their latest effort 2017's  "Black and White Rainbows". This is their 7th studio album and this tour has taken them all across the U.S. with a rare appearance in Central Florida. From the show's opening chords of " Everything Zen" off of 1994's breakthrough album "Sixteen Stone", Bush came out firing on all cylinders. Bush isn't a band on everyone's mind  these days but when you see them live you realize that they have quite a lengthy catalog to pull from. A majority of the show's setlist were known tunes that we've all heard at some point or another in your college dorm or car radio. Playing for over 2 hours, Gavin and Co. weaved in and out of their band's catalog sprinkling in a few new tunes while playing a majority of their biggest hits. While doing so, Rossdale was a man not showing his age jumping and running from the first moment up until the quiet end with a solo "Glycerine". During "Little Things", Gavin abruptly jumped offstage and ran down the security barrier while singing then sprinted to the back of the venue out of sight and reappeared in the upper balcony. Clearly having a great time running around high fiving the people in the balcony the band kept a solid jam going as Gavin found his way back to the stage and reappeared to finish the song with guitar blazing. Highlights included a laid back cover of R.E.M's " The One I Love" as well as an electric version of " Everything Zen" to kick off the show. The encore featured "Glycerine" and "Comedown" in stripped down versions with Gavin playing solo guitar. 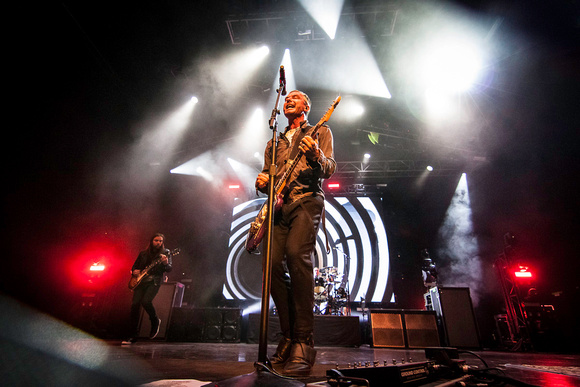 The Hard Rock Live Orlando is a bit of an enigma for concerts. While the venue itself is wonderful, it draws a transient crowd being situated right in the middle of Universal's Citywalk. As a result, the folks who pay for a show are often times there just to fill time and give them something to do. A majority of the audience are the vacationers which can give many shows at HRL a rude vibe with people talking throughout the show and not even paying attention to the music. Despite this, Bush still played one hell of a show and certainly surprised many of the attendees. If you see Bush are playing near you, definately buy a ticket and don't forget your flannel shirt.