It's been 20 years (over) since 1994. Kurt Cobain died and O.J. Simpson was in a white bronco chase. ER and Friends debuted as "Must See TV" and Pulp Fiction made Tarantino a household name. Grunge music was on it's way out the door and LIVE's iconic album "Throwing Copper" was released. This album spawned 4 top 10 songs and made LIVE one of the most popular musical acts of the 90's.

At the front of LIVE's presence was singer Ed Kowalczyk and his lyrics consisting of aspects of spirituality penned into aggressive rock anthems. LIVE went on to record and tour until 2009 when they went on a 2 year "hiatus" only to permanently disband due to legal actions taken by the band against Kowalczyk. Afterwards LIVE continued to tour with a new lead singer while Kowalczyk pursued a solo career of his own. With the 20th anniversary of "Throwing Copper" having been released April 19, 1994 Kowalczyk decided it was time to revisit these songs again and deliver them to the long time fans in a new yet complete package by playing the album front to back in an acoustic format. Having started this tour in 2014 , it finally arrived in Orlando for a sold out show at the Plaza Live Theater in the old Milk District near downtown Orlando on May 16th. Formerly an old movie theater, Plaza Live has found new life as the home of the Orlando Philharmonic as well as to multiple concerts throughout the year. 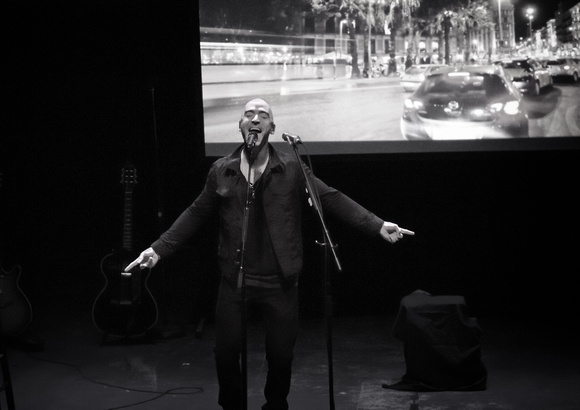 The set was minimal and to be expected for such a stripped down show. Just a singer and his guitar plus his touring guitarist. The mood of the venue was subdued as lights were dark with nothing more then a screen of flickering candles while the crowd arrived to their seats. Once the show began it got even darker and I knew immediately that I was gonna have a rough go with photography despite the liberal photo policy. Imagine if you can trying to photograph someone in a wine cellar with nothing more then ambient light to illuminate the subject and you can get an idea of what I was up against shooting this show. For the photo nerds out there I was shooting at ISO 4000-5000 the entire show as there was literally very little lighting to be had.

As Ed walked onstage he immediately went into "Damn at Otter Creek"  for the first track off of Throwing Copper. From there it was the entire album front to back and song by song with some verbal interjection in between. Prior to LIVE's biggest song to date (IMO) "Lightning Crashes" Ed told the crowd the story of his "little song that could" as he put it. The album had already been out for 10 months and the record execs were not too keen on the song before the album's release. As LIVE finished up the recording process, Ed drove off in his Honda and listened to the tape and knew the song would be a success. It took awhile but eventually it went on to become a #1 blockbuster and has been a radio mainstay ever since with it's muted beginning rising to a climax some four and a half minutes later. Following in the set was some banter regarding a song written about Ed's hometown and how the mayor wasn't very happy with him back then before launching into "Shit Towne". With it's lyrics depicting life in a post industrial wasteland it's not difficult to see the desire for Kowalczyk and his band mates to make it big. With the first set coming to a conclusion with "Horse" a song not even listed on the album Ed returned back to the stage a few minutes later for set two. 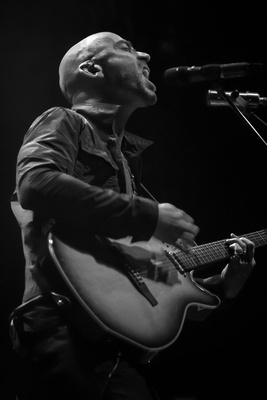 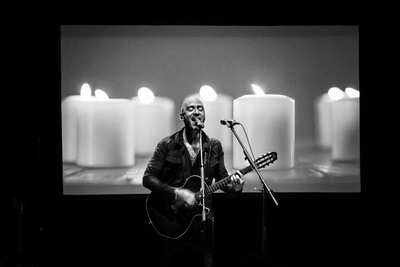 The second set commenced with the launch into the energetic"Lakini's Juice" off of LIVE's  follow up album"Secret Samadhi". This set included two solo songs "All that I Wanted" and "Seven" before finishing up with "Heaven" written about the birth of his first daughter and finally concluding with the very powerful and moving "Overcome" which became the reference point for everything post 9-11. This song was used in a montage depicting the horrific events that happened to the U.S. on that fateful day. It leaves you reminded just how fragile life is and just how vulnerable humans are to the terrible intentions of other human beings. While not a flashy show by any means, Ed delivered a very solid performance and delivered what was promised. A night with Ed Kowalczyk and his LIVE songs played in a stripped down bare-to-the-bones manner that left everyone still feeling like 1994 was just yesterday and that we are all still 18 years old. Grey hairs and all.  Ed Kowalczyk will continue his run of shows again on the 3rd leg in October starting in Portland, Maine October 5 and running though October 24 and hopes to have a new album out due later this year.

A complete setlist can be seen here: