This year marks the 20th year anniversary of The Offspring's debut album "Smash" which made them a household name in the mid 90's music scene. When grunge was still reigning supreme, The Offspring found a way to make punk cool again. To coincide with this anniversary mark, the band decided to go on tour in support of "Smash" with former label mates Bad Religion and Pennywise. Also on the bill were veteran punkers Stiff Little Fingers out of Belfast, Ireland.

Stiff Little Fingers began the late afternoon show in the searing Florida heat and played a rousing 30 minute set to the slowly arriving amphitheater crowd. Their energy set the mood for the rest of the night which would prove fun to watch from the relative safety above the pit. There is no doubting the sound of Stiff Little Fingers. From the opening chords the band proved to still have that late 70's punk sound that paved the way for the others of the time without missing a beat. Forming in 1977 they were a part of the UK punk invasion that brought the world The Clash and Sex Pistols and later The Police.

Pennywise was up next and had a fairly well received welcome. Lead singer Jim Lindberg even noted at one point that they really liked playing Florida as it was a lot like Southern California adding "only with better food". In 2009, after 20 years as frontman for the band, Lindberg decided it was time to move on to other pursuits and left Pennywise only to announce in 2012 that he was returning. The crowd had a fairly large fan base of Pennywise fans and after the few year hiatus began the night with their So Cal punk rock that had the back of the pit moshing and singing along. It was a tidal flow of sweaty, shirtless people running and jumping around in a large circle while pushing and shoving one another with random cups of beer flipping up into the air. 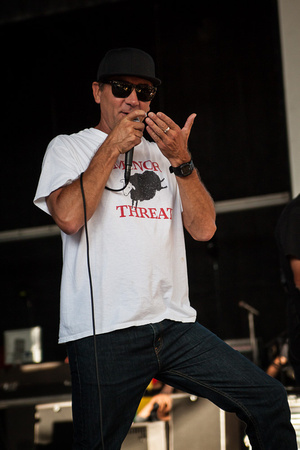 Veteran punk rockers Bad Religion walked onstage to a sea of cheers and blasted through their better know songs such as         "Infected" ," 21st Century Digital Boy" and " Sorrow" during their hour long set. Originally forming in 1979 in Southern California, Bad Religion has gone through it's share of ups and downs as well as any other band that has been around so long. Presently, 3 out of 4 of the original members are playing in the band with line up changes having occurred over the years. Only lead singer Greg Graffin has been the consistent member for the duration. 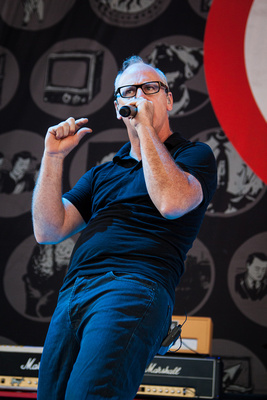 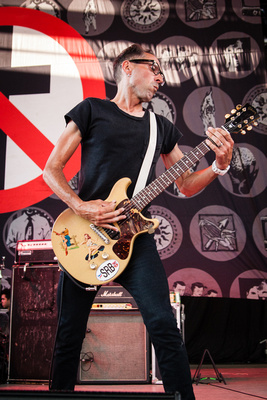 By the time The Offspring took to the stage the sun had set and the pit was packed. From the start of the show they told the fans that they were there to support "Smash" and would play the entire album from front to back in it's duration and then play "some other stuff". This was a somewhat difficult set to photograph as we were under restrictions of where we could stand as well as what we could shoot. After shooting the first 3 songs of the set I retreated to the relative safety of the seats above where I could get a hawk's eye view of the action down below me. It's amazing just how many songs The Offspring have that are popular that I know and they seemed to play many of them. Of note, during the show were the prior mentioned moshers in the pit. At one point I saw somebody doing back flips in the pit which also caught the eyes of lead singer Dexter Holland and guitarist Noodles who commented on it between songs. Later in the show I noticed the same someone being hoisted up onto the shoulders of others and then doing a back flip off onto the cement slab while others continued moshing around. While most of the participants in the moshing were males I did see a few females joining in which I am sure is rare sight. Thankfully, it did not get violent and looked fairly civil from my vantage point. A couple of fans did break through the line of security in front of the stage and ran on only to quickly turn around and immediately run and jump back into the crowd. Crowd diving had been witnessed! I've covered many shows at the St. Augustine Amphitheater and never have there been as many police officers as there were in attendance at this show. Thankfully, nobody appeared to be getting into any serious trouble and most of the officers stood stoically aloof just happy to watch from afar. 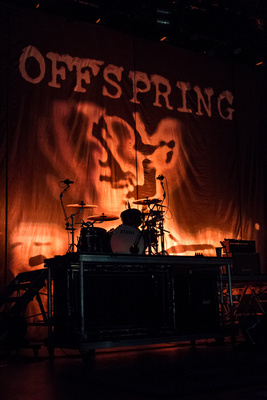 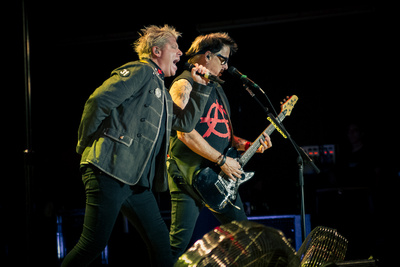 The opening  "La la la la la" and guitar riff of "Self Esteem" began and I was immediately transported back to 1993. No, it wasn't for this song. I was having flashbacks of Nirvana's " Smells Like Teen Spirit" which has the same feel and vibe. The crowd was jumping and singing along to virtually every word which was fun to watch. Upon completing "Smash" the band took a very brief 5 minute break only to come out and play a "greatest hits" type set which seemed to make everyone happy. Songs included "Pretty Fly For A White Guy" ," The Kids Aren't Alright" and "Why Don't You Get A Job" among others. If ever there were a show to wear ear plugs to this was it! The amps were cranked up so loud that I'm sure music could be heard in Jacksonville. Perhaps this is what caused the somewhat hurried close to the show as it promptly ended at 9:45 without any encore. I'm sure the camping neighbors at Anastasia State Park were not disappointed by the early completion. 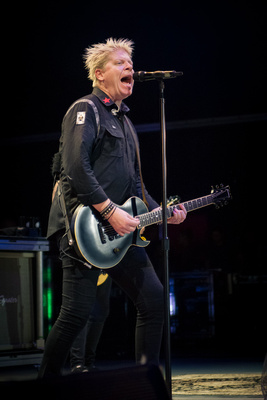 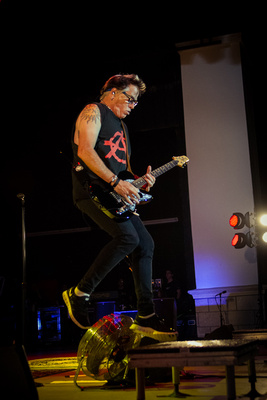 The Summer Nationals Tour will conclude on September 13 in Sacramento, California.