Boy. What a fantastic time I had shooting Dishwalla the other night in Orlando! First , I need to give a big thanks to Annie at Dishwalla's management for allowing me the opportunity to shoot the band. This was the first time Dishwalla had returned to Florida since 2002 on their Opaline album tour. Sadly, after that 2002 tour, the band went into hiatus for over 10 years and has returned with a new singer and new found energy. Playing on tour with Vertical Horizon and Tonic, Dishwalla were only allowed to play a quick 35 minute set which seemed to fly by since there were 3 bands to play that night and end by curfew. The band came out of the gates with one of my favorites "Charlie Brown's Parents" with it's high octane rhythms and set the stage for the rest of the show. From there they hit all their albums which included their 1996 mega-hit " Counting Blue Cars"  off their debut album which according to Billboard magazine, was the most played song on rock radio in 1996. Seeing the new lineup brought a lot of emotions. It was like when Van Halen and DLR went their separate ways in 1985 and brought in Sammy Haggar to fill that large void. I love Sammy and DLR and the two VH era's are vastly different. Hearing Sammy sing "Jump" was never very fulfilling no matter how much I love his style and conversely, hearing DLR try and sing " Right Now" just would never be the same. In 2012, Dishwalla officially announced that Justin Fox would take over lead singer responsibilities from original singer J.R Richards. While stepping into Richards' shoes is a big hole to fill, Fox did very well and was really putting it together on the band's tunes. Playing off of the crowd's energy, he belted out the songs and really put on a strong but albeit, brief show. I'm already looking forward to seeing the band again and hopefully will not have to wait another 10 years. 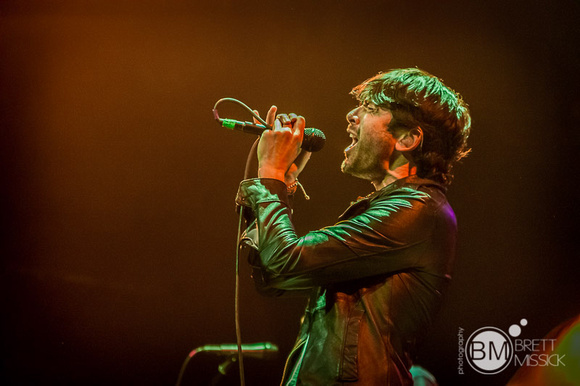