I've never had the opportunity to shoot at House of Blues before and I was at first a little overwhelmed. Not so much overwhelmed at the technical aspect of shooting concerts because I've done it quite a few times and it was no different then any other shoot as far as technicalities go. I was most overwhelmed at the fact that I had free roam of House of Blues from top to bottom and in retrospect I should have gone the balcony for some shots but that is now a mental note set aside. Typically, concert photographers are limited to their "photo pen" or "pit" which is right in front of the stage. Not a bad place to be in all honesty. However, for Big Head Todd I had a couple things I had to work with. First, I was using a 70-200 Canon L non-IS lens. Ok you're thinking that's a good thing, right? Well as I quickly found out shooting directly in front of the band with this kind of weaponry is like taking a bazooka to swat a fly.  I was so close that the lens actually reached TOO FAR. For the opening band, Rose's Pawn Shop I had the latitude to walk around all over and try new angles and different views. For the headliner, BHT, I was "stuck" in the pit for the first 3 songs and that is where I found I had to try and find some interesting subjects and compositions.  Sadly I wish I had a 24-70 mm lens to work with but it was not to be. What I was left with were a lot of close up shots and due to the stage being so high  my sight lines were severely hindered. I was trying so hard to get some shots of Brian Nevin the drummer, but his kit was so tight around his face and the stage so high it was pretty much a failure on my part. If I had been able to get to the back of the floor I could have gotten some really nice group shots and even drummer shots. What I was mostly left with were close ups of Todd Park Mohr.

The band was very engaging and Todd seemed to genuinely be having a great time playing. I was very pleased with some of the shots I got of him playing guitar. I want to give a BIG thank you to Alex and Jeff with BHT management. You guys truly were great and I thank you so much!       http://www.brettmissick.com/bht 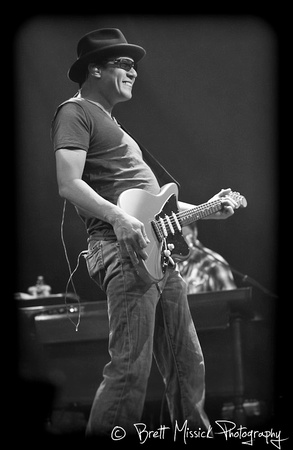